Andrea Savage ’94 has a sure-fire way to win an argument at home. “I always say to my family, ‘Technically, I am the President of the United States of America, so just shut up,’” Savage says with a laugh. “I do like to lord that over them.”

A prolific actress and comedy writer, Savage was sworn in to the nation’s highest office during her eight-episode run on the hit sitcom “Veep.” She played U.S. Senator Laura Montez, who outmaneuvered protagonist Selina Meyer (Julia Louis-Dreyfus) to become the country’s first female president.

Savage’s character is a savvy politician from a New England WASP background who, having married into a Hispanic family from New Mexico, assumes an ostentatiously Latinx identity for electoral gain—pronouncing her first name as “LOW-rah,” with a comically over-trilled “r.”

The bit was something Savage had developed during her audition, which included improvising with Louis-Dreyfus; it didn’t hurt that she’d studied abroad in Seville her junior year at Cornell. “I started throwing in some Spanish words and over-enunciating them in an aggressive way,” she recalls. “I do think that actually being able to speak Spanish—and my accent is decent when I want it to be—was a very good thing to have in my back pocket.” 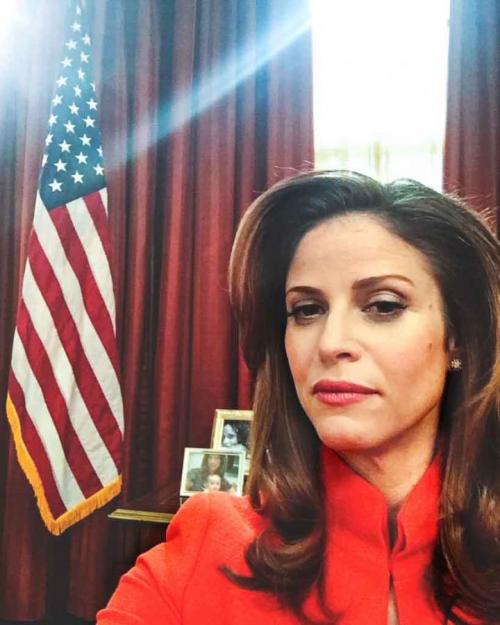 Savage snapped this selfie on the Oval Office set while shooting “Veep.”

“Veep” is just one of Savage’s dozens of credits stretching back to the mid-1990s. On TV she has had recurring roles as everything from a Brazilian exchange student (“Sweet Valley High”) to an undead CEO (“iZombie”) to a ruthless but sympathetic Hollywood executive (“Episodes”); she has guest-starred on “The West Wing,” “Cold Case,” “Two and a Half Men,” “Modern Family,” “Curb Your Enthusiasm,” and many more.

Her movie roles include Will Ferrell’s therapist and love interest in Step Brothers as well as appearances in Dinner for Schmucks, Sleeping with Other People, and the 2022 Netflix release Plus/Minus, costarring Lili Reinhart and Luke Wilson.

Among Savage’s other upcoming projects are an untitled Netflix comedy film starring Jonah Hill and a voice role in the animated show “The Freak Brothers” for the streaming service Tubi. Her writing credits include episodes of the HBO sketch comedy show “Funny or Die Presents” and a satirical short—a mock political commercial about abortion rights released in the 2012 presidential election year—she also directed and co-starred in with Kate Beckinsale and Judy Greer.

A Californian at Cornell

A Los Angeles native who “didn’t know how to put on a scarf” when faced with her first Ithaca chill, Savage majored in government on the Hill. “But I did a lot of theater while I was there,” she says. “I was kind of a secret theater person with a more grounded, realistic major.”

It was during her time abroad in Seville—with some space from her usual academic life—that she resolved to pursue a career in entertainment; she vividly recalls breaking the news to her adviser back on campus. “Her face sort of went blank, and there was this uncomfortable silence for about 30 seconds, and we just stared at each other,” Savage says. “And then she was like, ‘Okay, well, after that, do you think you’re more interested in law school or business school?’”

Back home in L.A., Savage took classes at the Groundlings (the famed improv school and performance troupe) and tried to break into the business. “I definitely had dark days where I was like, ‘Screw everybody, I’m going to law school,’” she recalls with a laugh.

“But for the most part, I felt like I always had some forward momentum. And I hustled and worked really hard; I attacked the entertainment industry in an organized, very academic fashion. I submitted my pictures and got into student films; I did a blind mailer for a commercial agent and got one. I think I had a strange amount of confidence that probably wasn’t—that I know wasn’t—justified, that pushed me through, especially in the beginning.”

Her own TV show

In 2017, TruTV debuted “I’m Sorry,” a comedy series that Savage created, wrote, and starred in. (The show is currently available for streaming on HBO Max.) She plays a comically overblown version of herself: her protagonist is a comedy writer named Andrea (who, like Savage, is married with a daughter and lives in L.A.), who navigates a variety of personal and professional crises, often of her own making.

Savage’s TV husband—doting, but every inch her comic foil—is played by Tom Everett Scott; Kathy Baker and Martin Mull portray her parents. “It’s very much based on me and my life; all the characters are based on real people and real relationships,” Savage explains. “But it is, let’s say, 30 percent exaggerated.”

The show is edgy and unabashedly raunchy; the fictional Andrea is whip-smart and often a tad too clever for her own good. In one episode, she cracks so many (very funny) off-color jokes to her fellow parents at student pick-up time, her daughter’s school institutes a policy against salty language.

In another, she finds herself in a parenting quandary when, after showing her 5-year-old The Sound of Music—a film she vaguely recalls as entirely benign—the little girl becomes terrified that Nazis are hiding in her closet. (It only gets worse when Andrea, scrambling for a way to explain the Third Reich to a preschooler, tells her that Hitler was like Voldemort in Harry Potter, only real.)

“I admire Andrea’s comic vision in ‘I’m Sorry,’” says David Feldshuh, a professor of performing and media arts who taught Savage as an undergrad, and who himself is a Pulitzer-nominated playwright. “It’s unpredictable, irreverent, and edgy, but also grounded in attention to credible detail from everyday life. Without trying to teach or preach, Andrea shows us something about our contemporary comedy of manners—what we try to hide and what won’t be hidden. And it’s laugh-out-loud funny.”

Without trying to teach or preach, Andrea shows us something about our contemporary comedy of manners—what we try to hide and what won’t be hidden.

After two seasons and twenty episodes, “I’m Sorry” is in limbo. Shooting on season three was postponed by the COVID-19 pandemic, and—despite good reviews and a solid fan base—due to upheaval at TruTV, production may never restart. As Savage explains, the concept for “I’m Sorry” sprang from a point in her career familiar to many actresses in their 40s: she found herself constantly being offered lackluster, one-dimensional roles as the stereotypical “mom.”

“I was like, ‘Why are none of these funny? They’re all harried and sexless. No one in these relationships seems to like each other,’” she recalls. “And I thought, ‘I’ve got some stories that I think would be funny in the retelling. And I want to show that a woman who’s 40, who happens to be a mom—one, it’s not the only thing that defines her. But also, you can still be funny and edgy, have a good marriage and enjoy parenting, and be dirty—to be all the things that I still am, and my friends still are.”

Invitation to Propose a Project