The Cornellian behind the slogan ‘Ithaca is Gorges’

Anyone who has spent time in Cornell’s hometown knows the city’s tourism slogan: “Ithaca is Gorges.” The ubiquitous green-and-white logo adorns merchandise from T-shirts to bumper stickers, hats to coffee mugs, cell phone cases to chocolate bars. With an illustration of a waterfall in place of the letter I, the pithy pun encapsulates the city’s natural beauty.

“It’s like a secret passphrase,” says Mayor Svante Myrick ’09. “‘Gorge’ is not a common word; it’s not like everybody has a gorge or three running through their town. So to understand why it’s funny—even the fact that it’s a pun—you have to have been to Ithaca.”

Over the years, clever variations have sprung up, becoming almost as well-known to Ithacans as the original phrase. They range from the straightforward “Ithaca is Cold” to the tongue-in-cheek “Ithaca is Gangsta” to the more contemporary “Riley is Gorges”—a nod to a local celebrity golden retriever who greets shoppers on the Commons with a drooling smile and a wagging tail.

“It’s a reflection of the community,” says Fred Bonn, former director of the Ithaca/Tompkins County Convention & Visitors Bureau. “It’s always fun to go to the Ithaca Festival Parade and see this year’s spin on it.”

These playful adaptations are possible for one reason: the man who designed the logo in the Seventies—the late Howard Cogan ’50, MPS ’80—never trademarked it. The owner of a small advertising business downtown, he conceived “Ithaca is Gorges” after local tourism officials tasked him with finding a way to attract visitors to the city. “He came out of his office fifteen minutes later and he had sketched it out,” recalls his widow, Helen Cogan. “Just like that.”

An Ithacan since age six, Howard (who passed away in 2008) majored in theater and later earned a master’s degree in communication. In addition to running his business with his wife, he taught advertising full time at Ithaca College, with part-time gigs at Cornell and Tompkins Cortland Community College.

When I travel anywhere in the world and tell people I’m from Ithaca, they’ll say, ‘Oh! Ithaca is Gorges!’ It’s a shared identity.
— Mayor Svante Myrick ’09

“He loved Ithaca; he never wanted to live anywhere else,” says Helen. “The slogan was his gift to the city. He didn’t want to make any money on it.” And according to Bonn, the logo wouldn’t have become nearly as widespread if Howard had capitalized on it. “You don’t have one company that controls it and polices how it’s used,” he says. “The community really owns it.”

Like other popular tourism taglines—including “I Love New York,” “Keep Austin Weird,” and “What Happens in Vegas, Stays in Vegas”—“Ithaca is Gorges” is recognized around the world. Many an Ithacan has a story about a connection they made because of the phrase—whether someone commented on their T-shirt one state over or on the other side of the globe.

“When I travel anywhere in the world and tell people I’m from Ithaca, they’ll say, ‘Oh! Ithaca is Gorges!’” says Myrick, who notes that he probably owns more shirts bearing the slogan than one human needs. “It’s a shared identity. It reminds us that we’re all neighbors.”

Read this story on the Alumni Affairs and Development website. 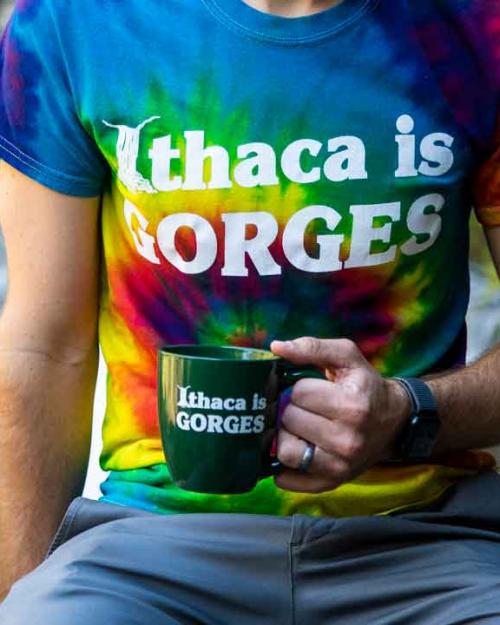