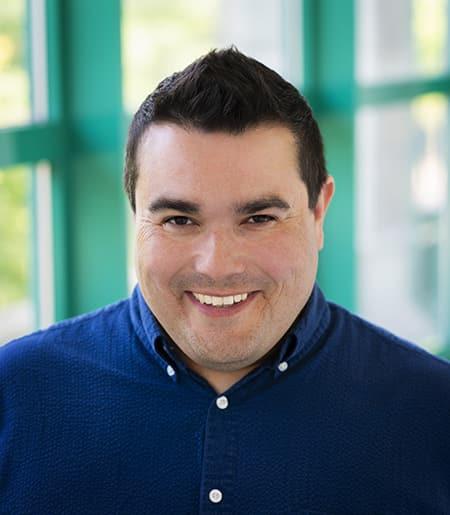 Jeffrey Palmer is an Associate Professor of Performing and Media Arts, a member of the Kiowa Tribe of Oklahoma, and is an award-winning filmmaker and media artist. He describes his work as a multimedia exploration of Indigenous people's lives in twenty-first century America. He recently completed the feature film, N. Scott Momaday: Words from a Bear, examining the life and mind of the first and only Native American writer to win the Pulitzer Prize for literature. The film premiered at the 2019 Sundance Film Festival and aired nationally on the PBS series, American Masters. In 2020, the film was nominated for an Emmy in support of American Masters' 33rd season, for Outstanding Documentary or Non-Fiction Series. The film also won the 2019 Ted Turner Award for the film that most encourages environmental stewardship. Of Palmer's numerous short films, Isabelle's Garden, was a winner of the Bill and Melinda Gates Short Film Challenge at the 2015 Sundance Film Festival. His films screened at venues such as Hot Docs, The Seattle International Film Festival, The Berlinale European Market, and many others around the world. He received numerous awards, grants, and recognition from the Sundance Institute, ITVS, Ford Foundation, Mellon Foundation, and the Firelight Media Documentary Lab. He is a member of the Directors Guild of America, International Documentary Association, Television Academy, and in 2022 completed the short narrative film Ghosts, which is chronicles Native American boarding schools in Oklahoma. He is currently working on the feature narrative script for the film Ghosts.