Cornell alumni Marvin A. Carlson is elected to the American Academy of Arts & Sciences.

Dr. Carlson's nomination comes after a life of exceptional accomplishments. He received his PhD in Drama and Theatre from Cornell University in 1961 before working as a professor at the University. In honor of Dr. Carlson, The Department of Performing and Media Arts at Cornell hosts an annual contest for the best student essay in theatre or performance, named the "Marvin Carlson Award." The award was created to honor the vast positive impact Dr. Carlson has made in the Arts.

Dr. Carlson wrote over two hundred fifty published scholarly articles and fifteen books. He is the founder and editor of the Western European Stages journal. He was granted the Sidney E. Cohn distinguished professor of theatre, comparative literature, and middle eastern studies at the Graduate Centre, CUNY. Additionally, Dr. Carlson is a recipient of the ATHE Career Achievement Award, the ASTR Distinguished Scholarship Award, and the George Freedley Award. Dr. Carlson received an honorary doctorate from the University of Athens, Greece, and was part of a Guggenheim Fellowship. Dr. Carlson has recently studied and written about Arabic theater's influence and history.

The road to Dr. Carlson's addition to the American Academy of Arts and Sciences was fueled by his passion for the arts and his scholarly accomplishments. Some renowned past academy members include Albert Einstein, Robert Frost, and Martin Luther King Jr. 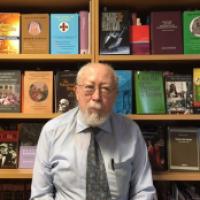