From Land To Land: A Video & Sound Installation Exhibit 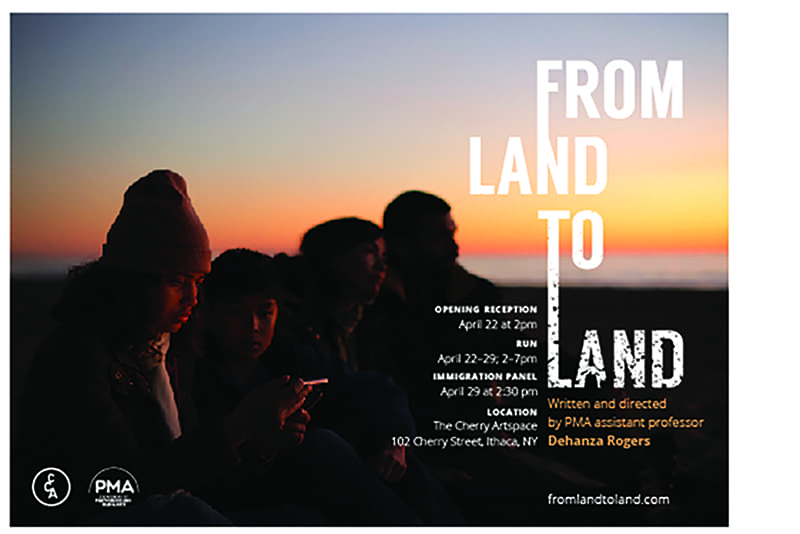 FROM LAND TO LAND is a video and sound installation, created by filmmaker and Cornell Assistant Professor Dehanza Rogers, that explores the vulnerabilities of status.

The exhibit will appear at the Cherry Artspace, 102 Cherry St in Ithaca, from Sunday April 22 through Sunday April 29, from 2pm - 7pm daily.

The exhibit’s opening reception will be at 2pm on Sunday April 22. Dehanza Rogers will introduce and inaugurate the work. At 3:30pm on Sunday April 29, the last day of the exhibit, a panel discussion will discuss the current state of our immigration system and what one can do locally to support those highly at risk.

FROM LAND TO LAND communicates its stories through two installation segments. An oversized traditional video screen dominates the room, showing undocumented families in crisis. This piece requires participation from the audience, as attendees have to literally lean in and listen at a door to hear the story of an undocumented Cornell student whose status could leave him unprotected and vulnerable. Stories and people are being forced behind closed doors, keeping their stories and themselves quiet and invisible. This invisibility allows for the stripping away of humanity of those effected by bureaucracy and the callousness of the current Administration.

FROM LAND TO LAND is generously funded in part by the Cornell Council for the Arts and the Department of Performing and Media Arts at Cornell University.

Further information can be found at www.fromlandtoland.com.

An award winning filmmaker of both narratives and documentaries, Rogers’ work has screened nationally and internationally. A Panamanian-American, her films explore the African diaspora, themes of race, and the liminality of statehood in relation to identity, as well as, youth culture.