By: Bryan Hagelin and Lindsey White,  Department of Performing and Media Arts
April 3, 2020

Although traditional live theatre is on pause during the COVID-19 outbreak, some organizations, such as The Neo-Futurist Theater in Chicago, are finding creative ways to engage with their audiences.

On March 29, The Neo-Futurists launched their opening performance of The Infinite Wrench Goes Viral, based on the company’s late-night experimental theatre event The Infinite Wrench. Since 1988, the company has held weekly performances in which 30 original plays are performed within 60 minutes, 50 weeks out of the year. Now, despite canceling in-person events and programs, the ensemble has honored the non-stop spirit of The Neo-Futurists by creating a virtual version of The Infinite Wrench, adapting current works for online audiences accessible at neofuturists.org. 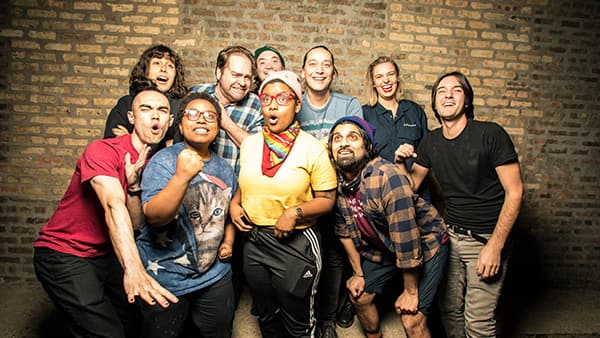 For Jorge Silva ‘12, managing director of The Neo-Futurists and former Cornell government and theatre double major with a minor in Latin American studies, this adaptability and accessibility are crucial to the mission of The Neo-Futurists. “Some of our greatest strengths are our resilience and our ability to create in a small window of time, and The Infinite Wrench Goes Viral is another example of that adeptness,” said Silva. “It is my sincerest hope that by making The Infinite Wrench accessible online and affordable, we can bring some relief to our artistic community and provide comfort to our audiences during this bewildering time.”

The timely, experimental nature of The Neo-Futurists’ work, which draws directly from ensemble members’ own lived experiences, makes The Neo-Futurist Theater a perfect artistic space for grappling with today’s pressing issues in an adapted online environment. “Our work is constantly responding to what’s happening in the world. As a collective that creates new material every single week, we’re accustomed to constraints that lead us to new unexplored territory,” said artistic director Kirsten Riiber. “For 31 years, we’ve provided a space for audiences to come together and see their experience reflected to them with honesty; and this is one of those times where staying present with our audiences, who we’ve never been able to do our work without, is vital.”

The Infinite Wrench Goes Viral is available to subscribers of The Neo-Futurists’ Patreon site. Information on how to subscribe and watch the performances online is available at neofuturists.org.

The Neo-Futurist Theater is partially supported by grants from Alphawood Foundation Chicago, Paul M. Angell Foundation, Arts Work Fund, The Chicago Community Foundation, Gaylord and Dorothy Donnelley Foundation, The Illinois Arts Council Agency, The MacArthur Fund for Arts and Culture at The Richard H. Driehaus Foundation, and The National Endowment for the Arts.

From the stage to the campaign trail, grants fund summer experiences